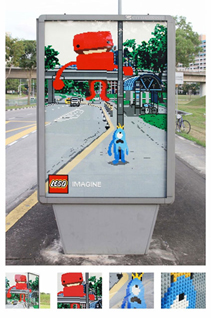 Certified Lego artist Nicholas designed three separate bus stop signs: Whale, Monster and Caterpillar. From the front the murals blend into the background, with lego characters parading the streets as if the board is a portal to another dimension that is entirely made of lego.

​A picture speaks 1,000 words, or in this case 12x optical zoom. These billboards designed by the team at Advico Young & Rubicam in Switzerland display exactly how simplicity can often be the most creative and impactful form of design. Each billboard is a zoomed in image (presumably 12x and taken by a Leica V-Lux 1 camera) of the object behind it, displaying the camera's superior zoom quality that doesn't miss a detail. 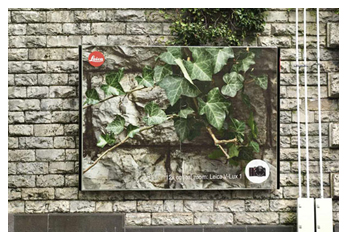 This utterly creative billboard design for Formula Toothcare takes its tag line 'builds strong teeth' to extremes. The 'broken' metal frame makes the billboard design look all the more realistic and eye-catching – ensuring a strong execution in delivery. This would certainly catch our eye if we were walking past. 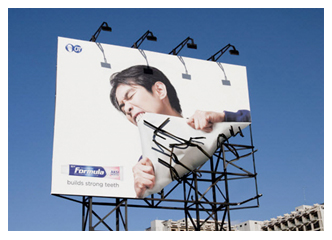 Out-of-home communications agency Posterscope developed an illuminating outdoor advertising campaign to promote the BMW i3, which is claimed to be the world's first premium fully electric car.

Posterscope's Hyperspace division worked closely with BMW's creative agency on the attention-grabbing campaign which incorporates 'Halo' lighting into customized billboard special builds to create an after-dark glow effect around 2D cut-outs of the i3. 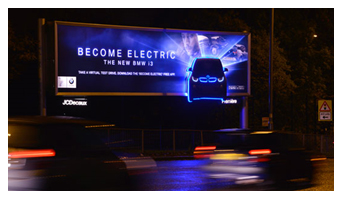 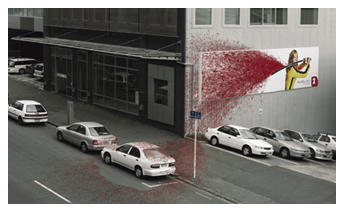 In order to promote the power of the Miele S8 monster suction vacuum cleaner, Bratislava-based adverting agency placed this brilliant billboard design over a well-known tunnel that gives the impression of various vehicles being sucked into the vacuum hose. 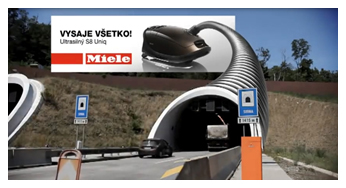 The concept for this powerful billboard design came from New Zealand-based creative agency Colenso BBDO. The team was approached by South Auckland local government bodies with a brief to create a design that would lower the number of fatal accidents on the road.

Noticing that accidents had increased during a particularly wet Easter, the road safety team put up this billboard that 'bleeds' when it rains. The message? "Rain changes everything. Drive to the conditions." If that harrowing image doesn't make people slow down, we don't know what will. 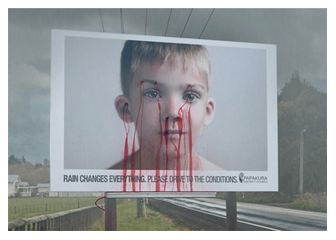 We love this comedic design for Panasonic's nose hair trimmer. The billboards were built around wires and poles to amusingly advertise the need for the device and showcase its safety cutting system. It's a fun and innovative idea. 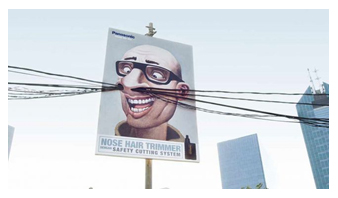 'Tailgating isn't worth it. Give Trucks room. It's the law.' That's the message that features on this brilliantly designed billboard for the Colorado State Patrol. It's simple, keep your distance or end up looking like the billboard. This is one design that will certainly grab the attention of drivers.​ 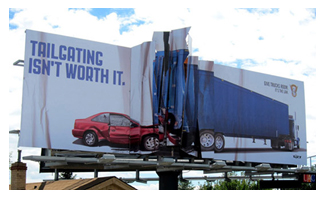 The Day After Tomorrow

In order to promote Roland Emmerich's 2004 global-warming disaster movie The Day After Tomorrow to Indian audiences, ad agency Contract submerged a billboard in the sea not far from Mumbai. The idea was to mimic the idea of Manhattan being overwhelmed by water, so the team also placed a replica of the Empire State building further out to sea. Leaving just the details of the film's release and venue, the marketing campaign attracted the attention of many a passer-by.​ 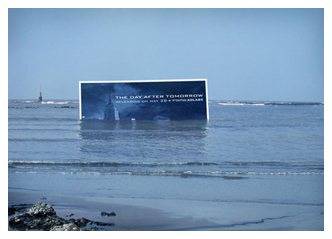 Levi's
With such a recognizable brand and product, a simple but clever design was all that was needed for this billboard. Here, Levi's lets its jeans do the talking, featuring a section of a giant pair of 501s, unbuttoned to reveal not only the infamous numbers, but realistic detailing in the denim, stitching, buttons and rivets.
​ 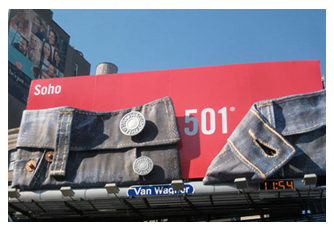 Heineken
This billboard for Heineken is a perfect example of how a small and simple idea that's perfectly executed can have a big impact. The three dimensional concept features a hand seemingly coming out of the background about to grab the bottle of beer.
​ 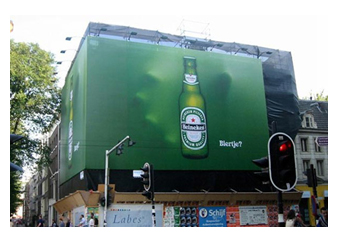 Absolut Vodka's long-running advertising campaign is one of the most successful consumer products campaigns in the history of advertising. Known for it creative design, the company outdid itself back in 2000 when it created this eye-catching billboard.

After teaming up with fellow Swedish global brand IKEA, the company transformed a billboard in Manhattan into a stylish, but cramped, New York City apartment turned on its side – and shaped like an Absolut bottle. 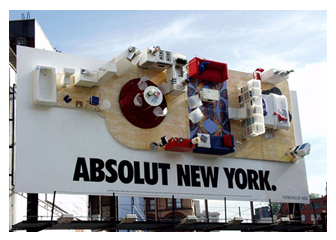 T3
New Zealand television channel, T3, went all out when promoting the latest season of Law & Order. Bringing in Colenso BBDO, the design team constructed a visual interrogation room, using the billboard lamp to spotlight the criminal. Mounted on a concrete building as a backdrop, the result is viewers find themselves dragged straight into the show itself.
​ 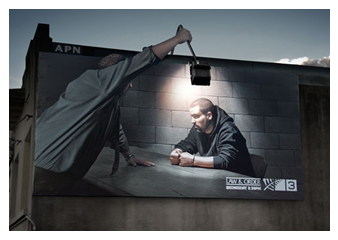 An innovative billboard can attract attention from miles around. Hence, ad agencies and art directors are continually thinking of new and innovative ways to use billboard advertising to grab the attention and imagination of their target audience. Large and prominently placed, billboards offer a huge canvas to target the public. But cutting through the surrounding visual noise is truly an art form.

The following brilliantly creative examples of billboard design do exactly that. Which is your favorite?

Follow the Arches
It takes a lot of chutzpah to mess with a logo, but that's what Toronto agency Cossette did for this McDonald's campaign. For the award-winning Follow the Arches campaign, the team deconstructed the iconic golden arches and transformed them into minimal directional billboards to help steer drivers to the nearest branch of McDonald's.

Lego has a consistently brilliant, creative and fun approach to its ad campaigns, but one that particularly sticks out is Oglivy Malaysia's bus stop billboards, featuring unique lego art that blends seamlessly into its surroundings.